I Got To On An Autonomous Bus Ride!

Yesterday I got to go on an Autonomous Bus. Now this is only in the Pilot Program. Which means their testing this how well it will be running and how well it handles the open road. We did not go on a major road as in autonomous bus, I mean we crossed a major road but we stayed on the side roads down by the marina area and down by the beach area which was a nice site and we got to take an area I've never seen in all the years I have been in this region over the years so it was a nice little route. Now the route is 30 mins in total which ain't that bad as we had to wait for the bus to go back and there was a lot of conversation between Eric and I afterwards and it was very educational on autonomous vehicles. There was a few things that it didn't like: one was the intersections. Olli did not like it and yeah it was named Olli. The other thing that it didn't like was leaves as it would randomly stop when a leaf went out front of us. I'm sure they will take this as part of the data and go from there. 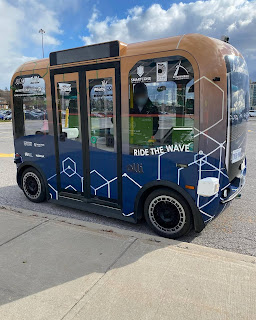 Now it isn't like a normal vehicle, where it goes fast, I asked how fast they go and 20 KM an hour in Autonomous Mode and 40 KM in Manual mode so it isn't meant but they could take this and actual put it in a vehicle that could go faster or it could even be that smaller vehicle which I entered an image of it on here on the right side. Now remember this is only pilot program and early stages of this so it is exciting they are even thinking about a autonomous bus or vehicle. The question comes will my transit by a couple of these and where will they place em in the region. This may actually be on one of the shorter bus routes and less busy but excited to see what is going to happen and I am going to be taking my dad on this next week so he gets an idea what it is like so it isn't my last time on this as I wanna show him what it is like but hopefully we do not forget to do it but we'll see. That is today's post and I hope you enjoyed this post about the autonomous bus and I highly recommend if you get an opportunity like this to take the chance. You will not regret it but I will talk to you all tomorrow!