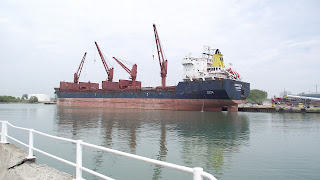 Yesterday I had the pleasure of being down at the lake for half an hour of my time as you can see on the left side is a boat, the Isabelle G which more then likely I have mentioned in a post on here and if I remember correctly this freighter was green and red at one point not dark blue and red or black and red so it must of been painted over since last year as I remember it was Green last year so must of changed locations which her home port is now in Portugal which I had a friend who went there and believe she was from there originally. 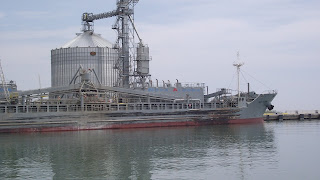 Now there was one other boat down there which is from here technically but originated from from across the pond from here but is now here and believe her home port is Toronto. NACC Argonaut which is similar to NACC Quebec as both are Cement carriers so they have the same setup except one is from here and the other is from Quebec. Now the last part I wanna add to this post is the mugginess made it hard to see out into the lake which is why it made these pictures even more spectacular and the reason these turned out well. We went out on the pier and nice to see a few people out but yes we were at a distance. There is my post for today, please note for yesterday's absence of the blog, I will be making it up with a post tomorrow on the blog which has already been written as I am off this weekend for the first time in a long time.