Got another massive update and this only part 1 of 2 of the updates with the second part coming next week on the same day and time. Anyways I wanna provide you with a two of the updates that I have for you guys today: 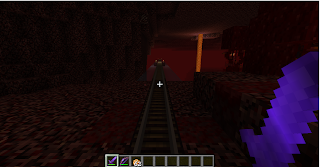 Nether Railway: It's not big  or long and it spans all the way over to the Fortress and that's it. Haven't really made any other plans to expand on the actual railway and go elsewhere as it is very easy to actually get lost in the Nether and not find your way out of there and it's happened to me before and I am lucky I can keep items when I die as I did the /kill command on the server and I ended up back where I was and had to go back in to wherever and whatever I was doing at the time. 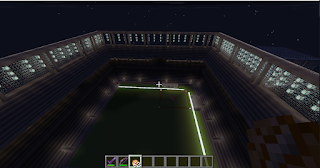 Baseball Stadium: I know that was work in progress for months as it was a very very big build to do especially with 3 deck stadium to finish and been 2 weeks or more since I have completed the project and now sits on the property tall and proud and yes I visit it from time to time especially the CN Tower next to the stadium which is literally next door to the stadium. Maybe one day it will have a dome on it just maybe we'll see but I like it as she is right now its got it's own little touch but if I do end up putting in a dome it'd be a glass but I have the weather set to clear for 999999999 and no joke either. That is my update, like I said another update is coming next week with what I did and should be about enough for updates for now unless I do something really drastic to the server but I think I am done with major projects for now. More on that next week until tomorrow's post have a great Wednesday!