Alright gaming updates and it has been a week or so since I've done one of these updates and maybe once a month is good enough for me but again it depends how much gaming I get in and there isn't I just do not bother.

The Binding of Isaac Rebirth: I went all the way and beat this blue Isaac guy, not 100% what he or it was called but I beat it and unlocked a bunch of things and one of them being Challenge # 31. That challenge has this big guy and it looks like Sheol which he has the brimstone shots and I hate it! It is a pain in my butt to be honest. However, I'll continue to try it and beat it and I think its a long fight but there will be a time and place I actually beat it. 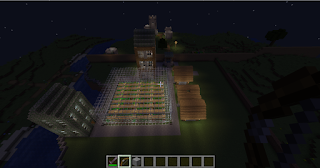 Minecraft: I know I haven't spoken much about Minecraft but behind the scenes I have been working on a new world. As you can see on the right side is part of what I had when I across the island a decided to even out the land mass so it was all even. You can see I've added homes and buildings along with a garden centre as well. Looks really awesome. I hope to eventually end up adding more villagers at some point. I think I will be keeping the walls up and just add in gates to get into the area so this way the Villagers cannot go everywhere. I can imagine the mass chaos of that. I could also build a bridge into certain areas too! Anything is quite possible.

That is my updates and hopefully by end of 2021 I will have the final updates for video games and I hope you guys enjoyed these updates for the blog. I got excited that I actually was able to give you guys an update on the gaming side of things and reason for a few weeks away was I have been busy with the collab non stop. Anyways, I will talk to you all tomorrow for another blog post.