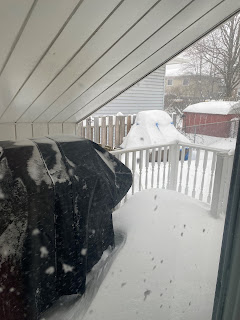 Last week, we had a massive snowstorm here in Ontario which was 55 centimeters of snow! Yes the most we have had since 1972 so that was a long time ago. However we survived, I for the most part along with my parents and I stayed home as we live on a hill and were pretty much stuck at home at the time. I helped my dad with the snow blowing on our driveway which even now I am still feeling the after affect of it with my back but that's ok really. It was great exercise and probably the reason I lost a ton of weight since then on Monday. Last major snowstorm where I was stuck at home, I believe was was when I was in college but still managed to go to school regardless with less students there. I never in the 36 years, my entire life and yes I gave my age which I'm not afraid of-- but I have never seen such a crazy amount of snow in my life. My dad even took a video of me snow blowing which I have yet seen which I have to ask him about it.

Was quite a crazy snowstorm but by the next day we were plowed out and able to go out and about so our city did a fantastic job digging us out of this mess, compare to past storms we ended up it was 2 or 3 days we had to wait to get unburied from the snow. However I ensure you we are perfectly fine and you probably did notice that I was onlin a ton more then usual that day.  I think it was just time where it was going to happen and only snow we have has been the light snow but either way that is today's post. Oh I have added a picture above  to show you how much we had! I will talk to you all tomorrow.