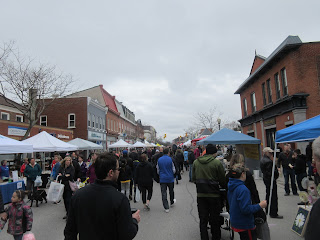 So I was back out and about once again to another event or function as this is now the start of the busy season for me has started. However like I said back in the beginning of the year, I did take some of the events out but that's not the point of this post. The point is I once again attended the Maple Festival 2019 locally here. I did manage to go last year and I know I missed the fall event in the little town. We were really surprised how busy the street was and last year at this time it was busy last year as well. So we arrived in Bowmanville and we started at the far end of the festival and we already pinpointed our lunch which was hot dogs and we always get one every year when we end up going to the event each and every year. 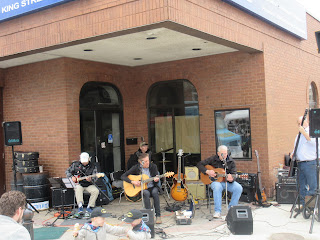 The next thing we saw was some entertainment by the former bank which is right now something else at the moment.  We saw Maple Syrup, Honey, fudge stands, a place you can measure yourself which I should of done it for the heck of it to see if I really shrunk that much at 33 years of age. LOL! Anyways they also had rides the Ferris wheel. Also had toffee and I believe they were giving small handouts of fudge and I just didn't get a chance to snatch one for myself or technically I could of shared it with my mom as she loves her fudge but we already know she has her fudge still from
what I gave her back at Easter time. We looked at Norm's Deli and busy as heck! Always nice to see the deli hustle and bustling with ton of people. 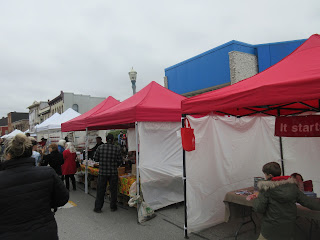 So also Tyrone Mills was there and you probably remember me doing a post about the Farmers Tractor Parade which I did not attend due to it being my birthday. They have their infamous donuts which is soooo good. They also have their really good tarts and also Apple Cider which they use to do right there at the Mill but they haven't done that in years but still very good cider one way or another. Also the fire department was there with one of their trucks for the kids. Finally I got to grab a cream horn which is a pastry with cream in it and I had it at Easter and it is really good! Also we grabbed some lunch and we had the dessert after to what we got from the coffee shop which is my dad's stomping grounds every Saturday mornings. Anyways it was a fun time and it was nice to be out of my stuffy studio after being stuck in for the past 10 weeks since Big Brother Canada began it's 7th season so I was able to get out of the studio for 2 hours.