Studio Has Been Tweaked a Bit Again! 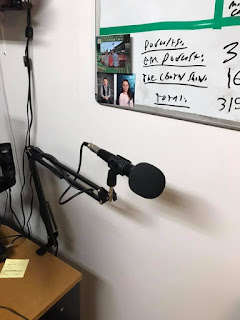 The ChrisBOnTheWeb Studios has once again been tweaked and I will explain what I mean. First of all the boom arm I was using for the microphone that is in front of me well that boom arm broke and I had to replace it with Larry's which Larry's is now totally replaced with a newer one that is shorter then what it was and really he don't need overly a long boom arm as I showed on the right hand side it's not a big boom arm but hey he has a boom arm. Yes he still has the old Audio Technica PRO 31 hand held that hasn't changed whatsoever. Reason you haven't seen it in my Facebook and Instagram Stories before it was brought back out is because I had it stored away at the time and it is now back in the studio awaiting his return to the studio whenever that may be as we really do not know. That is change # 1 that I made to the studio and I will get into the next change in a moment but I wouldn't have any other way to actually have Larry's mic and if this boom arm breaks I may just end up getting a microphone stand but I really think boom arms are just better to have as you do not have to move it around that much. 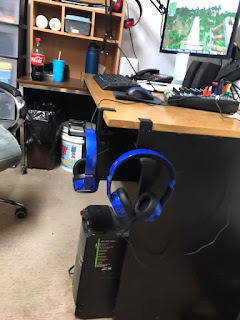 The second update to the studio and yes you can see Minecraft in the back drop which I will have an update eventually but I am talking about the headphones, yes there are now mounts on the desk unit and now we can hang up the headphones properly and there was actually room for two headphones actually so I could of just got the one but that's OK! They have their own set of mounts for both headphones and the one nearest to where I sit I also use for the Red Headphones which is used on a everyday use. So either way they both are used regardless and look way cooler then it being piled up on the desk and I consider these mounts a definite space saver and I got these on Amazon $2.72 Canadian which is not bad whatsoever and very, very cheap. Don't worry they are very strong in the way of strength as their heavy duty metal but definitely a space saver for the headphones and I got more room to do other things on the desk. Anyways that is my post for today and I am sorry if I am a bit late then the normal scheduled post but I got distracted this morning recording the podcast and tweeting about BBCAN9. I will talk to you all on tomorrow's post!