I have a bit of an update for you guys in the way of video games. Now I think and believe it has been 2 weeks or less but a lot has happened since then but here are the updates:

The Binding of Isaac Rebirth:  I once again did an Azeal and I actually unlocked a challenge with Mom's knife which I have beaten but it didn't cross out so I I have to do it once again but getting better and better as I keep going on and it will be the matter of time when all the challenges will be done. 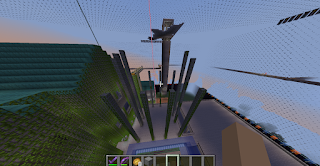 Minecraft: I have tore down the back wall and expanded the proprty itself which as you can see I have done and put a new ceiling and new walls and somehow the Pillagers find a way in or spawn inside the walls now which is odd but I have a bunch of Golems that have now wondered out front now so I may need to make more of em at some point. Started building an expansion to the platform that is actually bridged from the old one and currently putting in the windows in at this moment of time. Recently I have torn down the old 3rd building and the second time a building was taken down as demostrated on the picture above with the pillars remaining at the time of the picture taken, since then has been fully removed.  I have a plan for that but that will come in time as I plan on building in that place before the new Villager city on that new expansion is built.

Anyways those are the updates for now, hope you enjoy it and in a month I will be sure to do a full update to this expansion project and what moved and what not so be sure to be in the lookout for that in May as I should be done with that by then and I will talk to you all tomorrow!