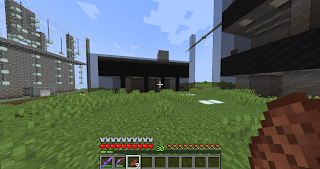 So I have been working on the Minecraft server on my own, no real help honestly but that's OK, I can surprise my niece and nephew and I have finished the hockey rink and tower 1 which you can see a partial part of it at the right side -> and yes I used an arrow to sort of point that direction.  Now the tower you see in-between tower 1 and the football stadium is the new Tower 2. Yes this was my nephew's idea to sort of replicate the towers in New York and it is only 12 storeys tall technically. I may add on later but what I care about is building the second tower up then continue to grow and I'm thinking 20 and 25 storeys tall that is the goal but you are limited how high you can build it but I am going to try my best.

Now Stardew Valley, I am like in Year 5 now and in the spring season. I have gotten a ton done and done some major farming and building. I have since the last update probably weeks ago but I have since added and doubled the amount of chickens and cows so the farm is very, very full right now and I need to actually think about expanding the wall and the winter season may be the best time to actually start the project since it is too cold but I'll try and see if there a way to put down a wall or not. Also the farming section of this game, I have done a ton of farming and made a ton of money that came with it. I have gotten far on this game but I had a bad habit of buying way too much right now. The goal now is to build two more barns for goats and I think ducks perhaps but I tried to get goats as now I have a 3rd barn with more animals in it but it costs 4 grand a goat now which is ridiculous honestly. So gotta grind and earn more mollah (Money). Anyways that is my post for today, I will talk to you all tomorrow for the end of the week updates, have a great rest of your Thursday!