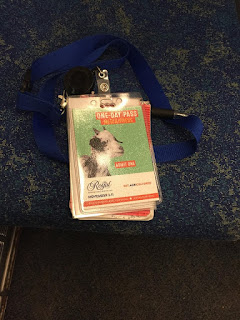 I got to go to The Royal Agricultural Winter Fair with my dad and I had my Media Pass this year once again which I appreciate the Media Pass Staff giving me the pass once again this year and it was a great time indeed. So we left the house, which we were originally going to be leaving from Oshawa but we wanted hot drinks and a treat to get our morning started obviously. So we ended up in Whitby and we got there and I had to add on to my Presto which I will be doing a throwback Thursday story this week about a Presto card mishap during the fair. Anyways the lady there whom mind you was so helpful to me but she told us that there are no trains going into or from Oshawa/Whitby stations for a reason I yet to find out but just looked and apparently it is happening all weekend long with hourly service which would of really put us behind on schedule if we missed the train we would of had to wait an entire hour which would of stunk. 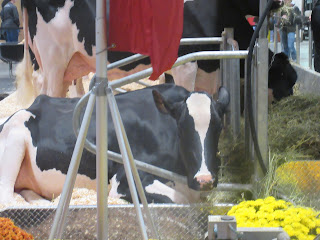 So we got at Exhibition Place at a reasonable time and we had a bit of time to look around before the Royal Horse Show begun. We looked at the animals first, the sheep and goats and I thought about my teach Mr. Plishka's comment about the goats or my friend Dougie whom use to call me an "Old Goat" ha ha. , We also saw the cows as well. Now mind you we rushed the cows but went back through in between and I will get into that shortly.  As you see on the left of the text content I got a cow actually posing for the picture 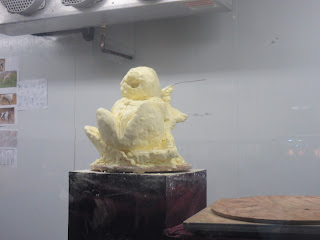 which is very rare to happen. There was Milking Short Horn, Areshire, Holsteen, Jersey Cows, Angus beef Cows, you name it! Also they had goat judging going on around where the goats, rabbits were. Mainly it was goats in the one area. We then went to the Royal Horse Show which is a tradition with my dad and I, we always go to the Horse Show as it is now a part of the entire experience. The Horse show also included Jumping Speed Competition. We went back into agricultural show floor, they had Horse equipment, saddles, boots, blankets. Also they had one amazing BBQ and quite expensive @ $5,000 but it was huge and really nice! They had Apple Dumplings as well and booths from Muskoka, Hawberry Farms, Thompson Strawberry Farms and much more from local farms as well. Albion Hills farms was there and their pizza looked so amazing and smelled good. They had the Wheat, both bunched up and the grains itself. Also barely, soybeans, oats which horses love and also Corn! They once again had peppers & tomatoes  plants this year which was different. They had chickens with the eggs this year which I need to do some research on that this week. Also the Butter Sculptures which there wasn't wasn't many but remember this was the start of the Royal and very much early in the 10 days of the Fair but watching them sculpt the butter is so amazing, I could sit there all day watching it. The cows were being judged and I tried from the other side of the ring to get a picture but it wasn't easy but got one from the west side of the ring. Also there was Pigs, the mother with the young pigs but the younger pigs weren't piglets they were fairly good side now. There was Weaner Pigs, baby calves and some of the them were actually nice and fury and I managed to get pictures but you can check out my Instagram for more pictures which I will be posting up today throughout the entire day into the evenings I will post up some stuff too.  Now back to the horse show, we missed the Percheron Jumping Competition but that's OK. Also entertainer Pogo Champs which was really cool to see and my dad was talking to me about Pogos back when he was younger. They also had the Clydesdale two horse team as well.  They had the Single Road to Wagon and also Percheron two wheel cart which I wasn't expecting the wheels of the cart to be that big and never seen these before. Also the last performance we saw was Guy Mclean with his horses and I remember one of the horses name was Lighting. 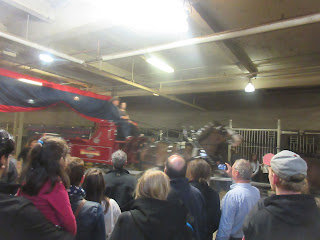 Finally we went to the Horse Palace as we decided to not stay and watch the Belgium 6 horse team at the Royal Horse Show however after walking around the upstairs of the Horse Palace, we managed to actually see the Belgium 6 horse team leaving but not just 1 but all 6 teams we came from 2 different directions where we were, the left side of the picture on the left and where you see the 6 horse team coming from more in the middle to the left side. Sorry for the bright pictures, I gotta learn how to take better pictures in the lighting but you get the idea where I'm coming at with the picture but it was indeed really neat to see this happen especially when we were present. We saw on our way out, a herd of cows with people directing them, maybe just walking em around a bit, not sure but was cool and you will have to check out my Instagram today with more pictures. Overall was a great day despite the train mishap and us being shuttled to Ajax from Whitby but it was all worth it in the end at the end of the day! Cannot wait to return next year.