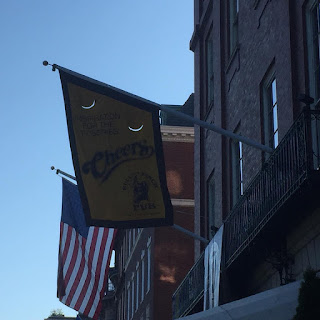 The last place I went to on the trip in the way of eating was Cheers and yes I realize it is the name of the TV Show. Also it was the actual set of where they filmed the TV Show back in the days in the 80's into the early 90's. Yes I have seen an episode to see if I actually like the show and I did! I plan to watch more down the road too! Anyways comparison from back then to now its different. At one point it use to be a wide open as a bar but now has the front room which is quite quaint honestly and a back room with more space for eating and what not but still quaint place and really looks like the actual bar from the actual show which actually it is what my parents actually told me so. However it was filmed in Los Angeles technically. The bar was inspired for the show! 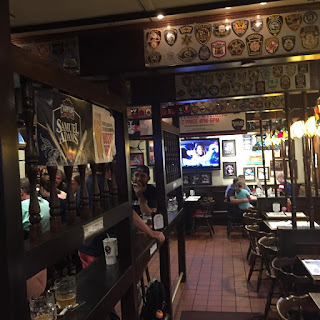 Now to the food part of it  I had a Cesar Salad with a nice home made mac and cheese. The mac and cheese was so creamy and gooey but really super delicious. Cesar Salad I had was so fresh and was exactly like the way my mom makes it here at home from time to time. Overall the experience of Cheers In Boston was great, the server she was so amazing! Big shoutout to her, I think her name was Sarah but that seems too long ago about 2 weeks now since we were there but either way she was really nice! I would give Cheers a 20 out of 5 as it was above and beyond our expectations compare to the food review that is about to come up in the less then 2 days, Friday to be exact as I am not for one looking forward to reviewing it and been dreading it for the past little while now but I have to deal with it and I will try to stay positive and nothing negative for the blogs sake which I have so far in the last 600 + posts I have done over the years. Tomorrow I am doing something different so stay tuned for that!


Have a great night! Sorry this is extremely late as I have been spending time with my niece and nephew lately!