My Favorite Trips I Like To Go In The USA

So, today's blog off with me covering my favorite trips from both up here in the USA. This will be quite a lengthy post but going to try and keep it short and sweet. I will split the two

Let's start with the United States of America, the good old US of A. I have been to many places in the States I would visit again too in the near future and my dad doesn't know this but next year I would like to go back to Lake Placid once again and I've been there before and would go back. Few things I loved was the Arena where the Olympics were and I remember the arena very well. Also I would like to go back up on White Face Mountain which I sort of remember going up there but hard to remember that far back what I saw up on the mountain. Also Lake Placid was where the 1980 Winter Olympics were. 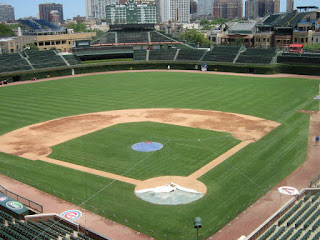 Next is Chicago, loved visiting Chicago, going to Wrigley Field, eating deep dish pizza which is a well known thing in Chicago. Got to ride the double decker tours, the single older tour buses, cruise tour along the river there seeing all the different buildings within the city of Chiago, got to see Trump Tower Chicago which Bill the first winner of the Apprentice got to chose as a job within the organization. Also got to see Solider Field where the Bears NFL team plays, got to see the waterfront as well. I would go back and see more of Chicago, see the Museum of Natural History, find where the Blackhawks hockey and Bulls basketball team plays. See what I haven't yet to see in the city of Chicago aka the Windy City.  On the side of this paragraph is an image of Wrigley Field.

The next Vacation I went to was in the same line as the Chicago visit is Minnesota and the reason why is because I have cousins down in Minneapolis. One thing I didn't know was the TV show Mary Tyler Moore was suppose to be filmed in but I believe it wasn't but the intro was done in Minneapolis. I would like to ride the  streetcar but it's a long train and you can walk right through it. Toronto has those kind of streetcars. Also of course I'd see another Twins game, hoping they can start being a good team again and they are getting better as they are winning again and even at home but the game was so much fun and it was a different atmosphere in a open stadium from the dome stadium out in Toronto so the experience was fun! Plus I got to meet the organist and I got a picture taken which is this picture: 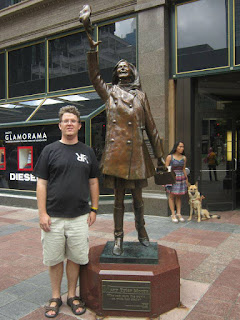 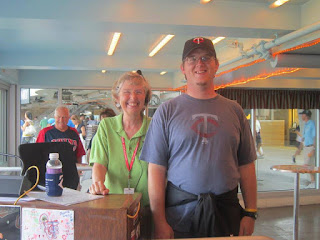 I added the Mary Tyler Moore statue as well. There are too many pictures of my trip to Chicago/Minnesota but added 3 of them one in Chicago, two in Chicago and I am merely excited to eventually visit both cities again in the future. In conclusion of this blog post today I would like to say stay tuned for the Canada Vacation Spots I have been to on Wednesday and of course I will add more pictures to that post as well. Finally I will be making a post as more of an announcement in a few days from now as I have made a decision on an event I was suppose to go to has changed.


Have a great day!